Aproject that has been 30 years in the making for Te Pahu¯ resident and former Waipa¯ mayor and Waikato regional councillor and chairman Alan Livingston will finally be released this weekend. Alan’s book Te Pahu — A history is being launched on Sunday as part of the 110th anniversary of Te Pahu¯ Hall. More than 200 people are expected to the event. Alan says the village’s school and hall were opened at the same time, so in 2011 the centenary of Te Pahu¯ School was given priority. At that time Alan had already put two decades into his research of history of the region — which also includes Karamu, Kaniwhaniwha, Harapepe and Te Rore West. “I have always been interested in history and realised we were losing some of the old Te Pahu¯ identities so I started interviewing them for first hand recollections,” says Alan. “I kept chipping away, talking to people and checking other histories to verify the information. “It was a labour of love that I have finally been able to complete over the past 18 months since retiring from local body politics.” Alan says having a deadline of the hall celebration gave him the impetus to complete the work. He had earlier tried to have it done for the 2015 anniversary of 150 years since the soldier settlement — but that “came and went”. During the process Alan was also distracted while he compiled and wrote the Livingston family history. He thinks two books is enough — although he has enjoyed the interviewing and research process and says some of the stories and people he has written about have been amazing. “There are some quirky and unique stories,” he says. “Stories such as why and how Pirongia Rugby Club was renamed Karamu for a couple of seasons, and the local who not only fought in both world wars, but was also a prisoner of war twice — once in each war.” Alan says he has assembled the book in chapters based on themes rather than a chronological account. He believes it makes it easier to read and more appealing because it doesn’t have to be read in one go. “There is a huge amount of detail in the book, but readers can pick and chose the themes they want to find out about.” Alan has printed 500 copies of Te Pahu — A history. He says the final push to complete it couldn’t have been achieved without some invaluable assistance. “My wife Janet has put up with me and the project since the start and amongst everything else is an invaluable proof reader.” Grants were received from Waipa¯ District Council Heritage Fund and the New Zealand Founders Society. Volunteering their assistance were Bev Gibbs (photocopying and scanning), Brony Doreen (proof reading) and Alan Hall (historic and research help and advice). “Sonia Frimmel contributed her professional layout and design skills to bring a series of historical stories into a very readable book,” says Alan. Copies of Te Pahu — A history are available from the author: email ajlivingston@xtra.co.nz or phone 027 572 0060. 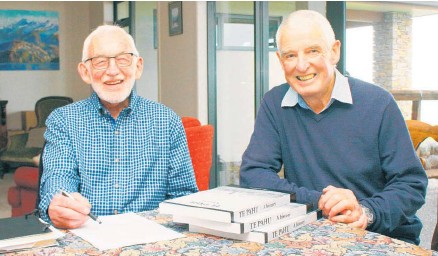